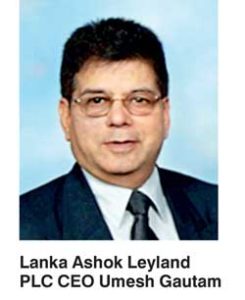 Demand for Lanka Ashok Leyland products drove turnover to Rs. 7.2 billion for the first six months of 2017, a 49% increase over last year’s revenue. On the back of an impressive few quarters, turnover for the 2nd quarter of 2017 stood at Rs. 4 billion, a 41% increase over the same quarter in 2016. Gross profit for the six months grew 33% to Rs. 563.8 million while marginally higher import costs squeezed the gross profit margin to 7.5%, a decline of 90 basis points.

The impressive sales performance comes on the heels of Lanka Ashok Leyland’s push to market its updated product line which is technologically superior to its competitors featuring radial tyres and ABS systems and for the first time in Sri Lanka, will set an environmental standard for its commercial vehicles in line with the international European Emission Standard. All Lanka Ashok Leyland vehicles will now be sold as EURO III compliance which limits the amount of Carbon monoxide and other harmful emissions from the vehicle

As of 30 September 2017, Lanka Ashok Leyland held inventories valued at Rs. 4.9 billion signifying a 33% increase, while interest bearing liabilities rose 65% to Rs. 2.9 billion. The increase in inventories comes on the back of increased demand and Lanka Ashok Leyland’s efforts to introduce new technologically superior and environmentally cleaner range of their vehicles to the Sri Lankan market.

Commenting on the results, Lanka Ashok Leyland CEO Gautam added, “We felt the timing and market conditions were best suited to introduce EURO III commercial vehicles to the market. The EURO III standard restricts the amount of toxic emissions from automobiles and many countries across the world require all vehicles to adhere to a European Emission standard. Sri Lanka has not updated or implemented an environmental standard for road transport since 2008 when it set emission standards for vehicles.”

Gautam further explained, “With road congestion and environment pollution becoming a constantly growing problem in Sri Lanka, we felt it was incumbent on us as the market leader for commercial vehicles to act and set a benchmark with the hopes that others will follow suit despite an absence of a regulatory framework on environmental engine standards. We hope to repower older vehicles with newer environmentally friendlier BS3 engines over the coming years.”

“In addition to the environmental benefit, the new stocks of vehicles now come with ABS brake systems and radial tyres for increased performance with less wear and tear making it technically superior and economical to run. As our results have shown, the demand response has been very positive and reflects the strength of our brand and the reliability of our product.

This fact is further reaffirmed by our range of school buses which boast the best-in-market safety features including a speed limiter, anti-skid flooring, extra guard rails, teeth guards with a rollover compliant design and frontal crash protection.

On the increase in inventory levels, Gautam responded, “As our turnover crosses Rs. 4 billion for a quarter, it necessitates an increase in our inventory levels that would be greater than one quarter of our sales. The strength of our balance sheet has allowed us to take on extra debt very comfortably. Finally, the exchange rate has not been as volatile, and this has helped us so far both in pricing and inventory build up.

“Looking ahead, Lanka Ashok Leyland will continue to lead the industry in product superiority and customer service. We are already exploring the possibility of introducing electric hybrid products into our product mix given the response for our latest rollout.”